At the end of the 1990s, Angelina decided to experiment with more feminine-looking styles. First, she dyed her hair red and had Marilyn Monroe-style hair. Her hair really highlights her cheekbones and her chin. 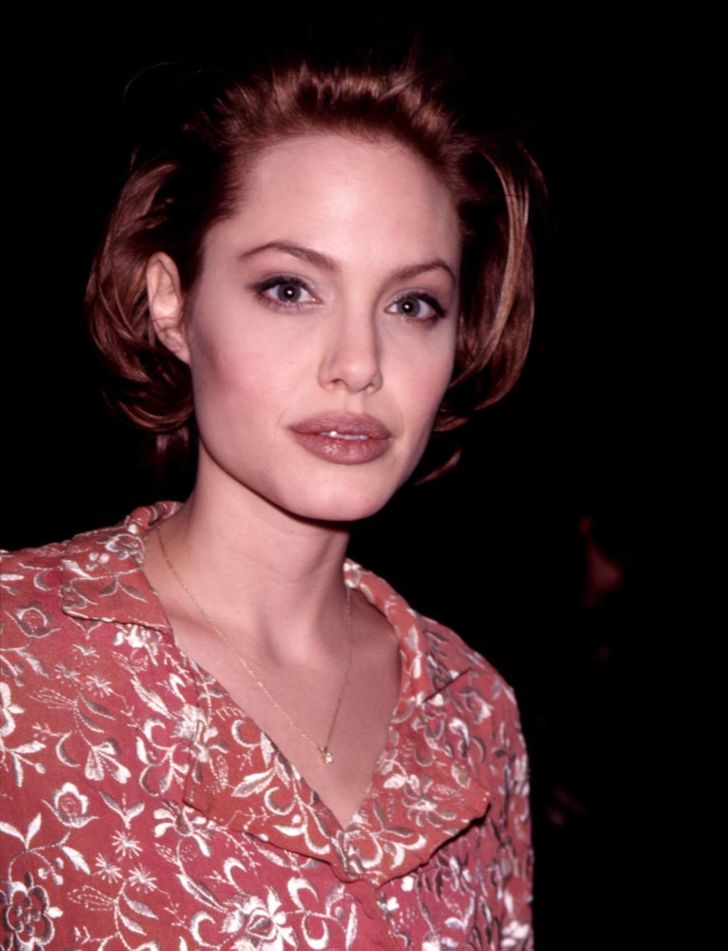 In 1999, Angelina was probably the most famous blonde in Hollywood. 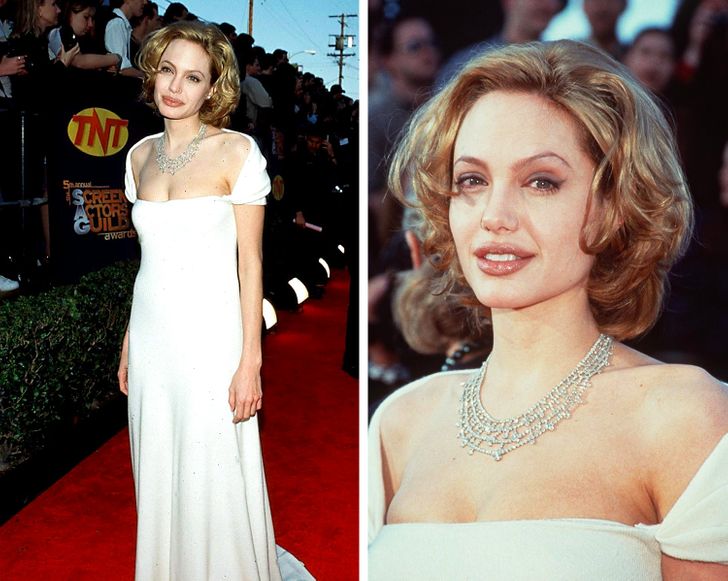 In 2000, Jolie returned to the image of the bad girl. This was also because she got married to Billy Bob Thornton, who is 20 years older than her. At their wedding, she was wearing jeans and a T-shirt and so was he. She dyed her hair dark and started wearing leather again. 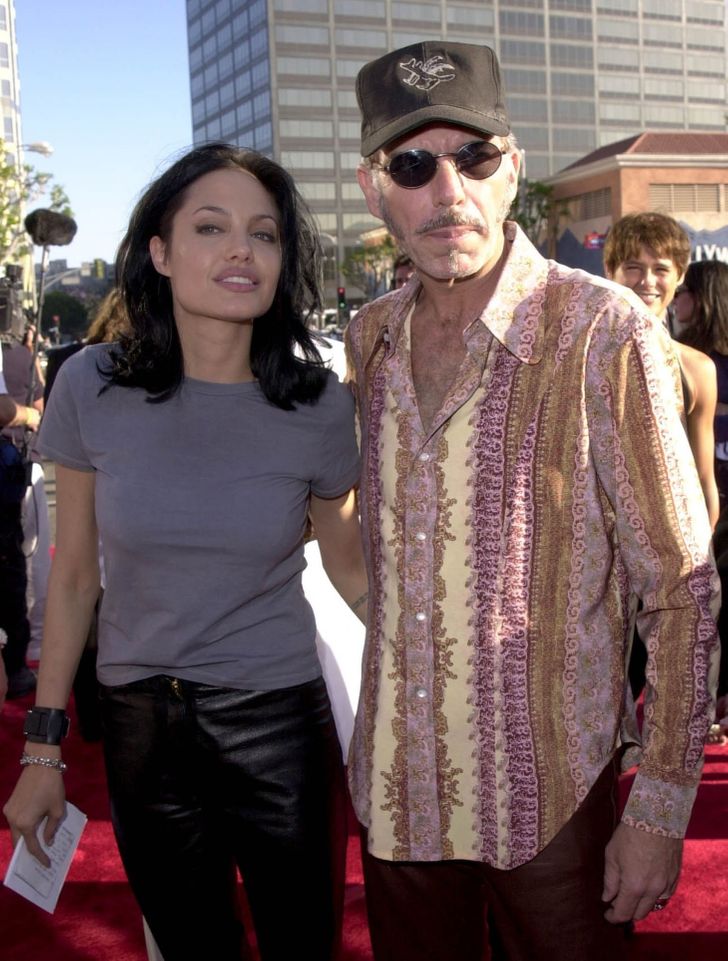 At the Oscar ceremony in 2000, Angelina had long dark hair and wore a long black dress — she looked a lot like Morticia Addams. By the way, this was one of the most popular dresses of the gothic 2000s. 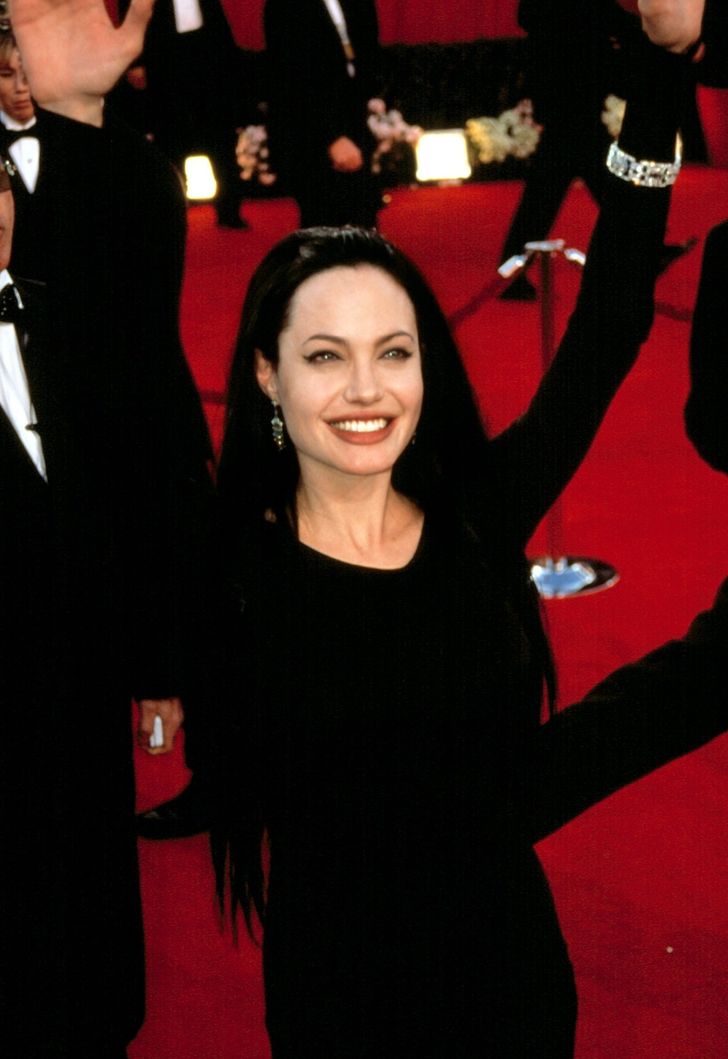 One year later, Jolie returned to her natural hair color and looked as if she got like 10 years younger. 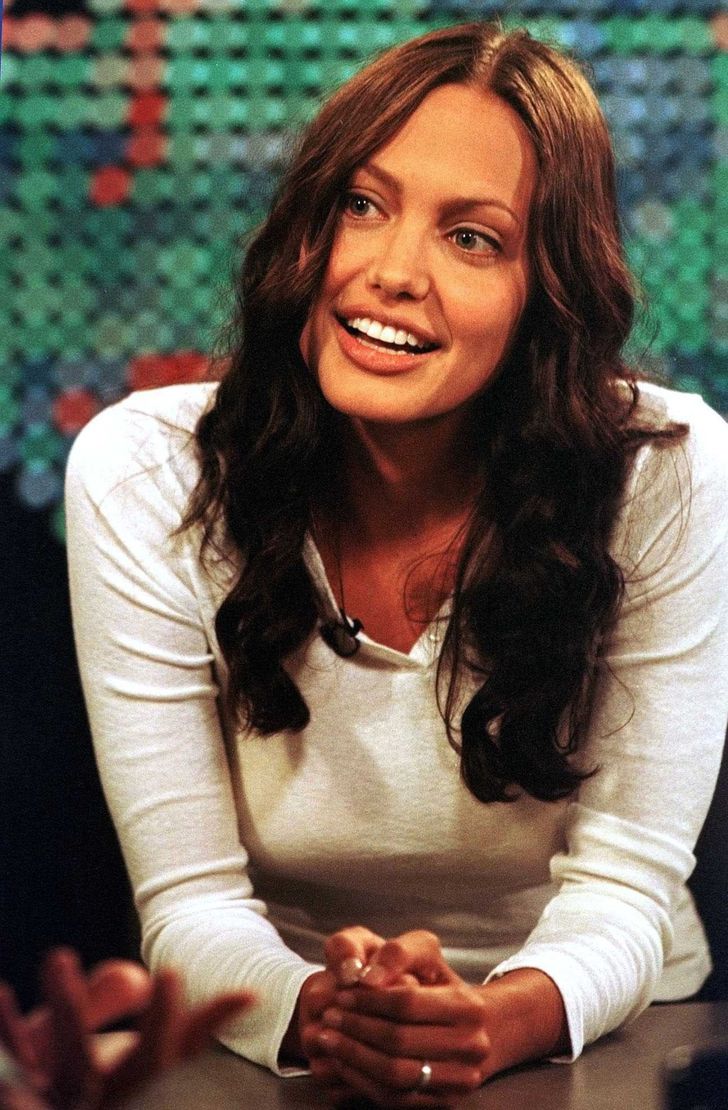 But Angelina hasn’t completely forgotten about her rebellious times. Short tops, low-rise pants, and long nails were a hit of the 2000s. This is not a look for everyone, but Jolie is an exception. Maybe it’s because she keeps things simple: she doesn’t have too many accessories. Or maybe it’s because she drew inspiration from her character Lara Croft. 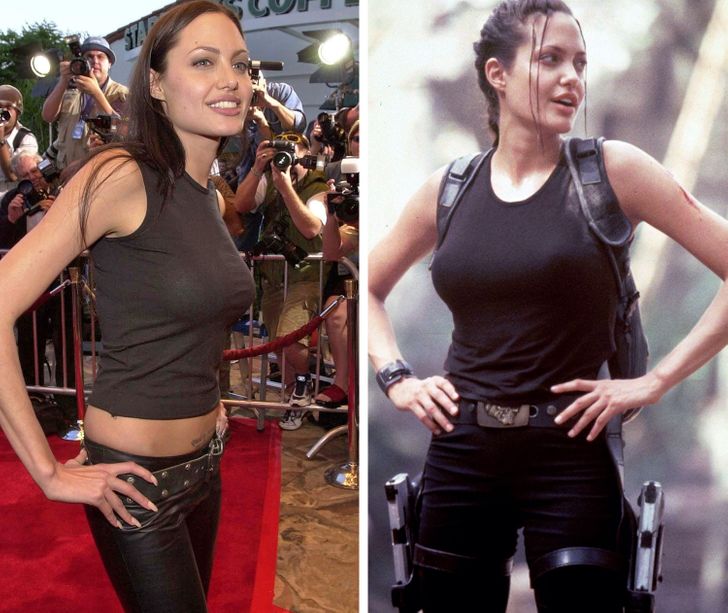 Which have only gotten more and more elegant over time. 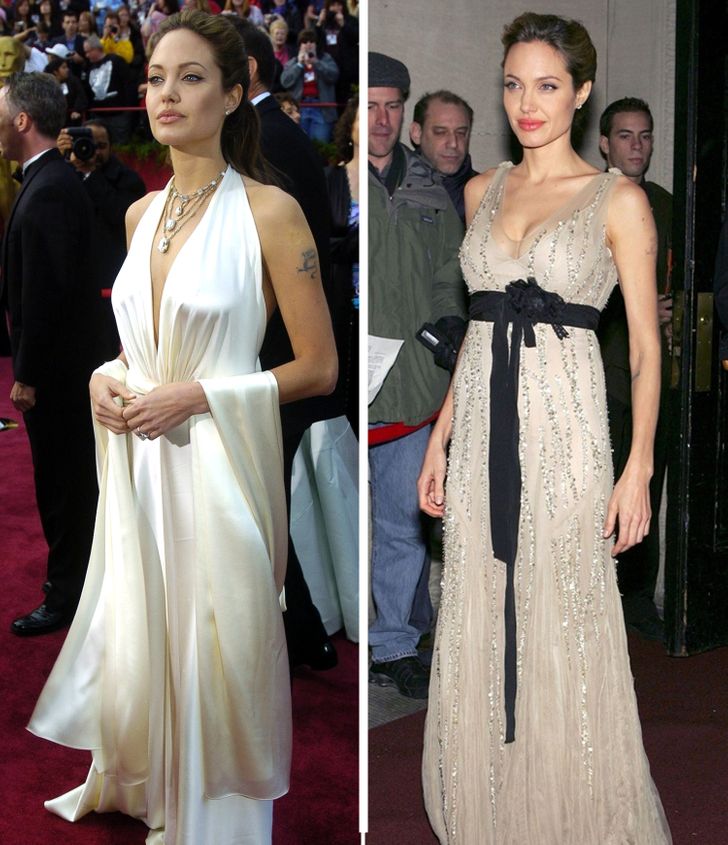 Of course, she doesn’t completely neglect the color black or the leather that she really loves. As a dress, it all looks amazing. 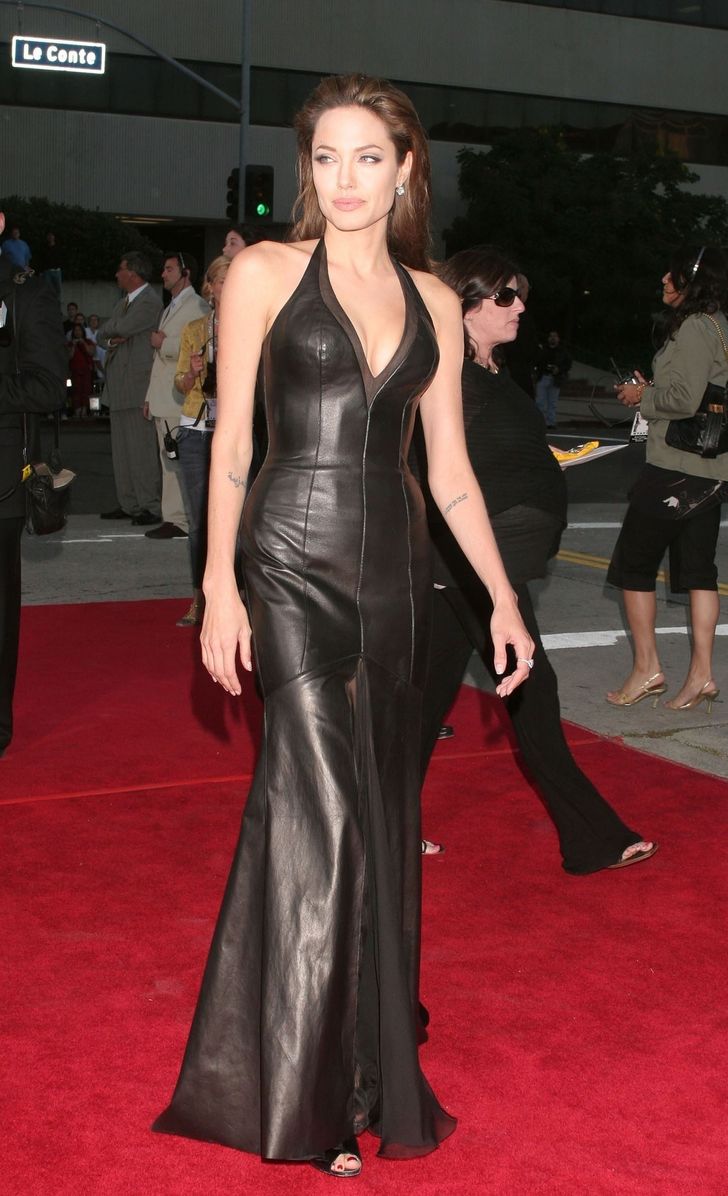 Angelina, who loves long dresses, doesn’t wear minis very often, especially on the red carpet. Maybe, she should have — she looked amazing. 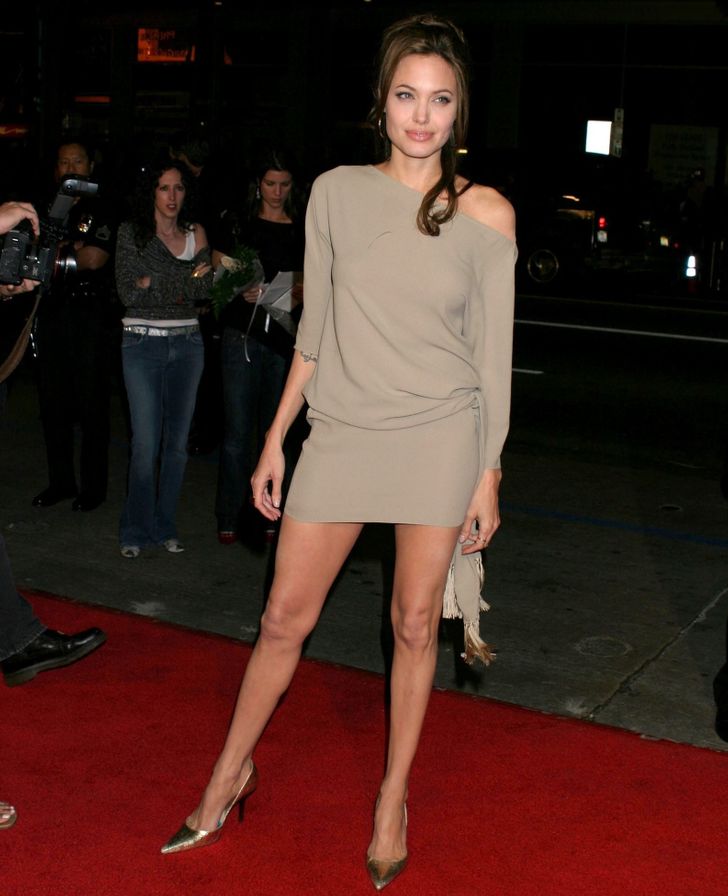 There’s an opinion that leopard print doesn’t look good on anyone, but it seems that Jolie proves this idea wrong. 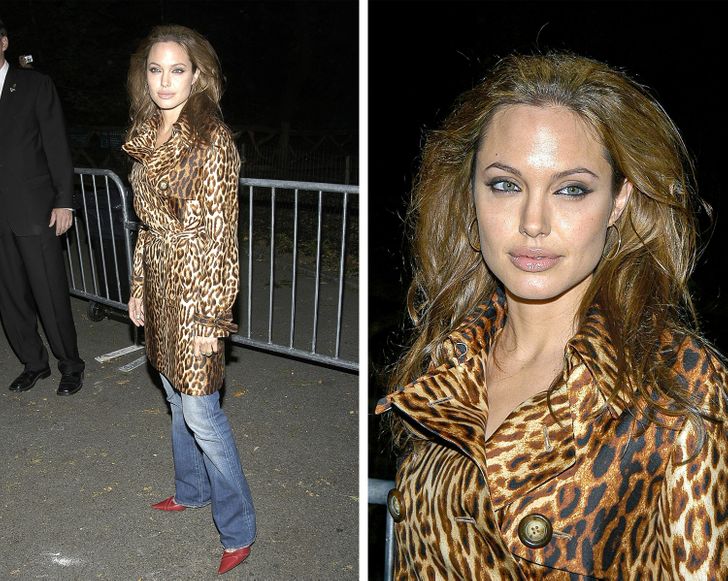 In 2005, she starts to wear more delicate outfits. And this is around the same time that she and Brad Pitt start their relationship after Mr. & Mrs. Smith. Do you believe in coincidences? 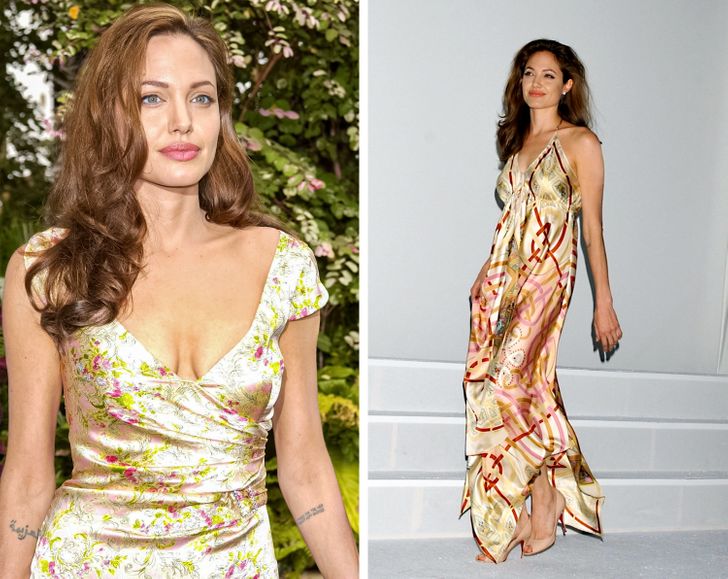 After they started their relationship, Jolie started wearing a lot of suits. 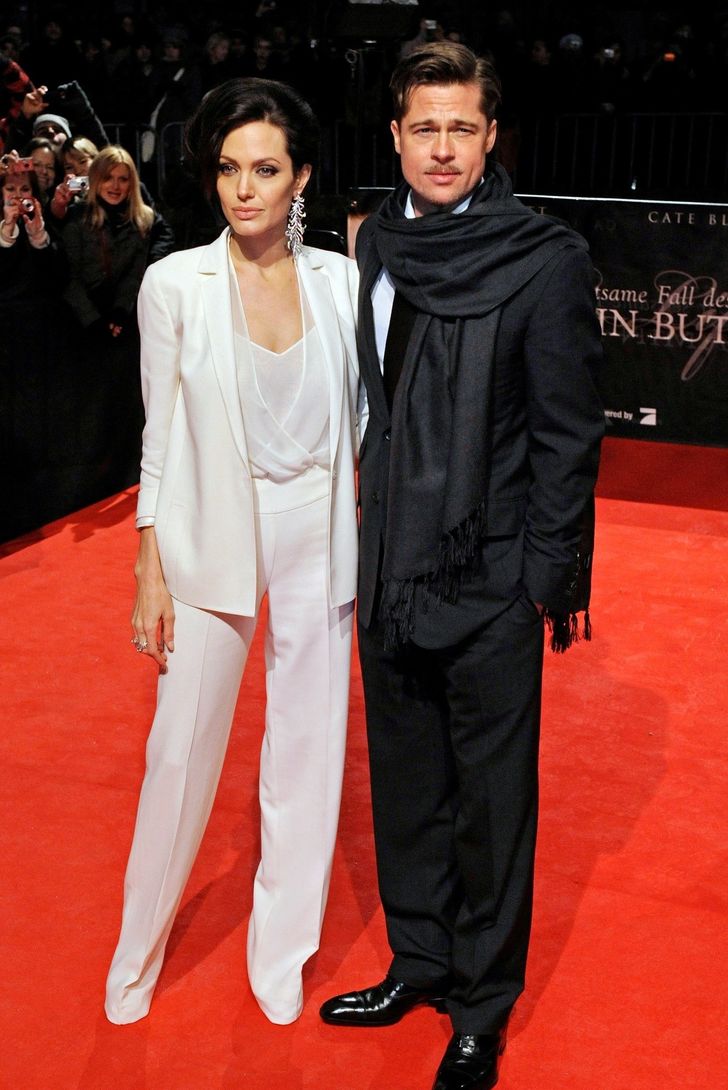 Back at the beginning of the 2000s, during the shooting of Lara Croft: Tomb Raider, Angelina went to Cambodia and she was horrified by how poor the country was. She started her charity activities there, she became a Goodwill ambassador, and in 2005, she was invited to the World Economic Forum in Davos.

Even when she was pregnant, Jolie was traveling around the world trying to help people from different countries. And this is when her clothes became more business-like. She couldn’t talk to very powerful and serious people and still wear leather pants, right? 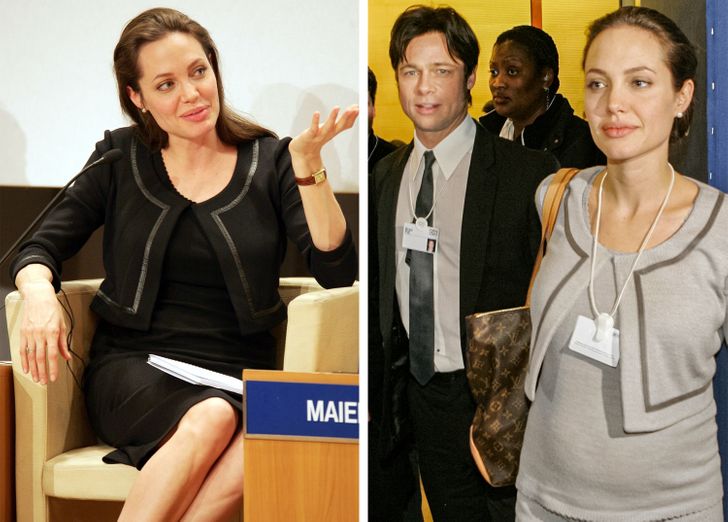 By the way, when she was pregnant, she wore a beautiful, long, and light dress on the red carpet. 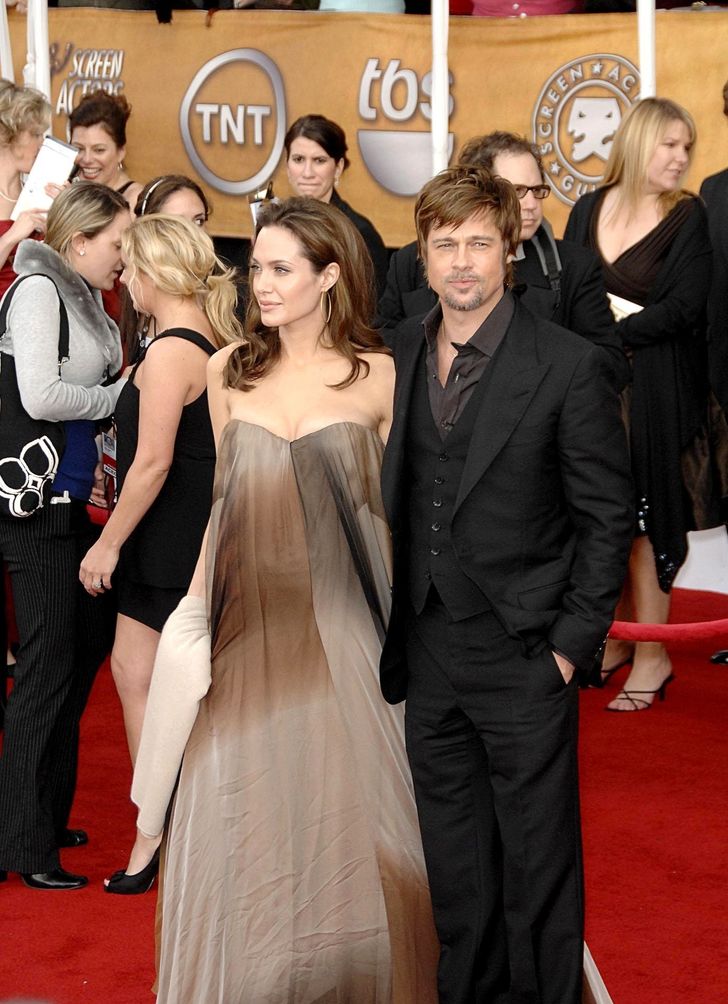 One of the most important principles Jolie has is appropriateness. She knows what to wear on the streets of Pakistan and how to dress for an official reception. 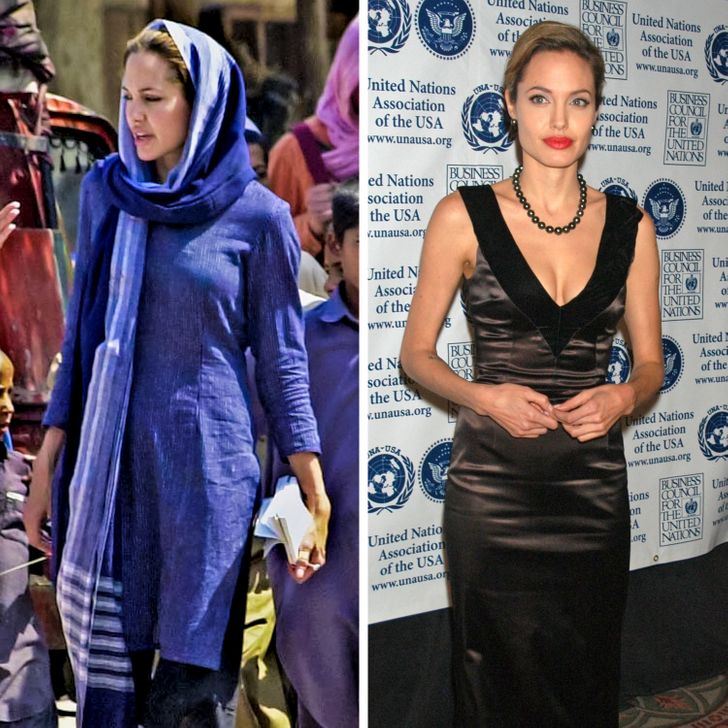 Jolie also loves dresses that show one leg. Some people laughed at these looks. They even made a Twitter account for her leg. 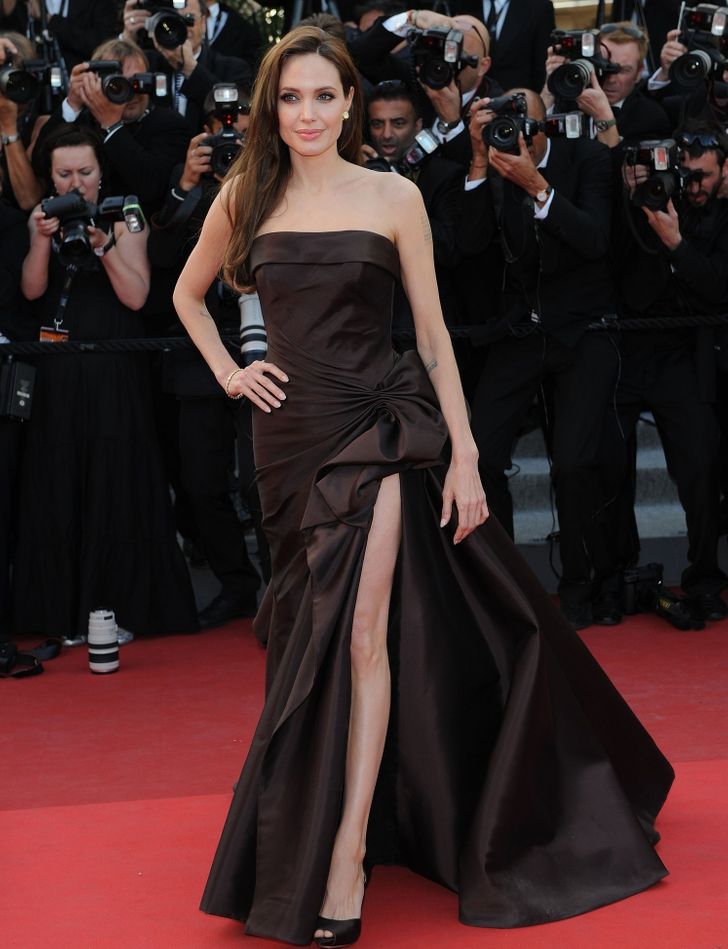 The actress loves trying the look of her characters in real life. In 2010, Salt was released where Jolie had charming bangs. She loved this hairstyle and even kept it for a while. 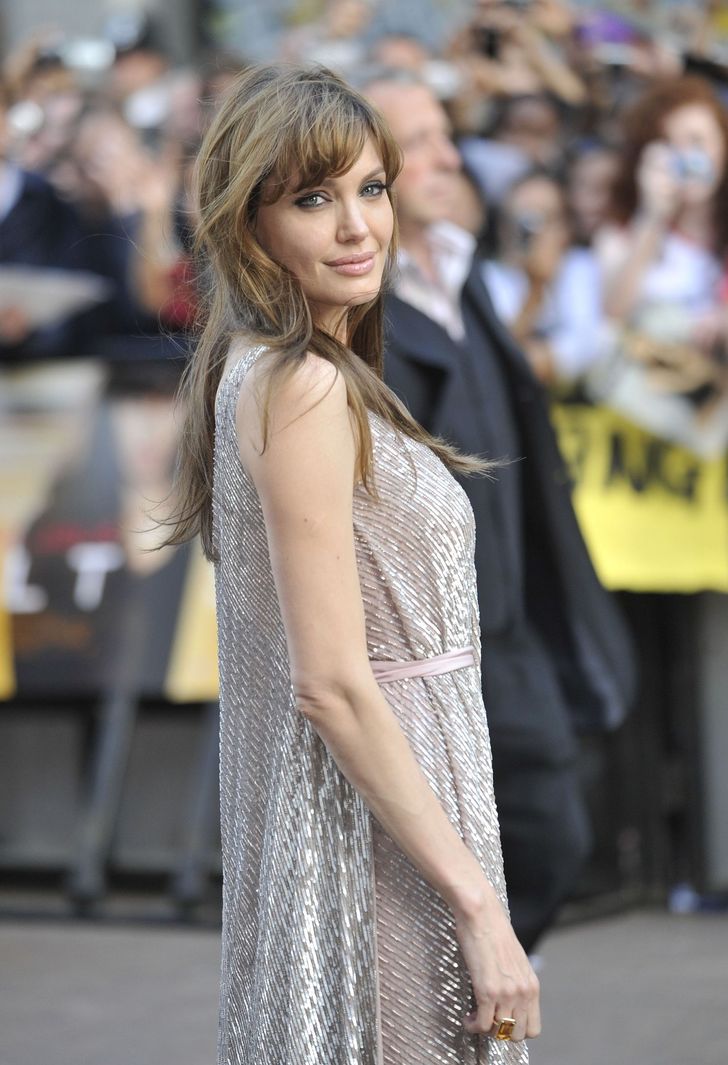 She clearly prefers a total look, especially when it comes to wearing black. But sometimes, there are exceptions in her wardrobe, for example, a long blue dress or a cocktail dress with a yellow insert. 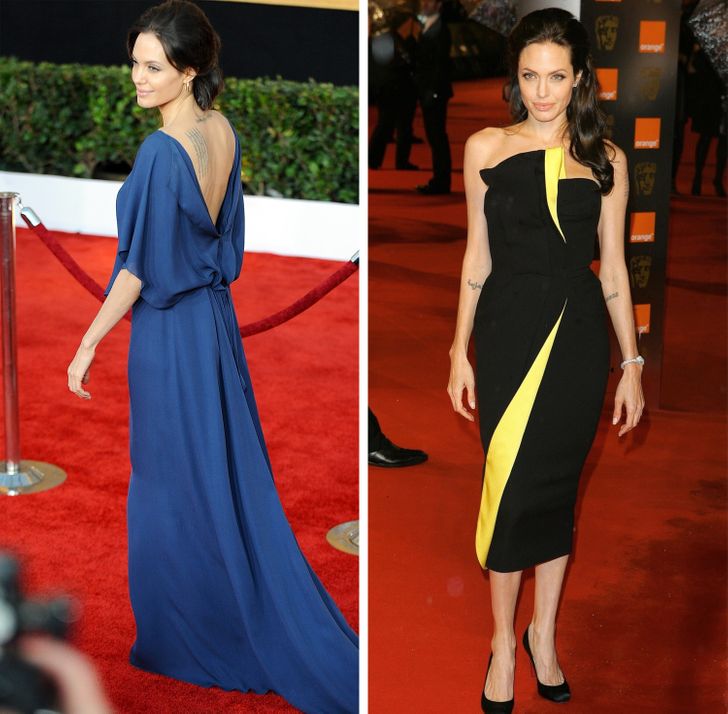 But in her everyday life, she loves comfort and simplicity.

By the way, she is okay with trying the same look twice. For example, the Lara Croft or the goth look. 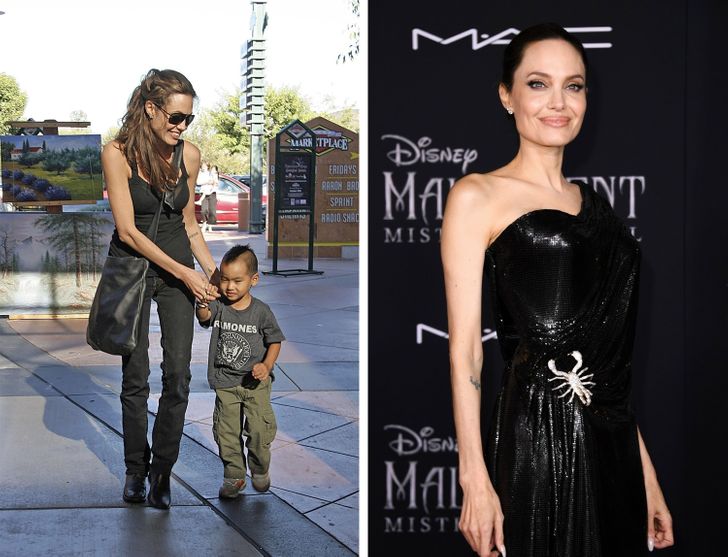 The actress never stops experimenting with her style. After the premiere of Maleficent: Mistress of Evil, she got a dress and a tunic that both looked like an exotic flower. 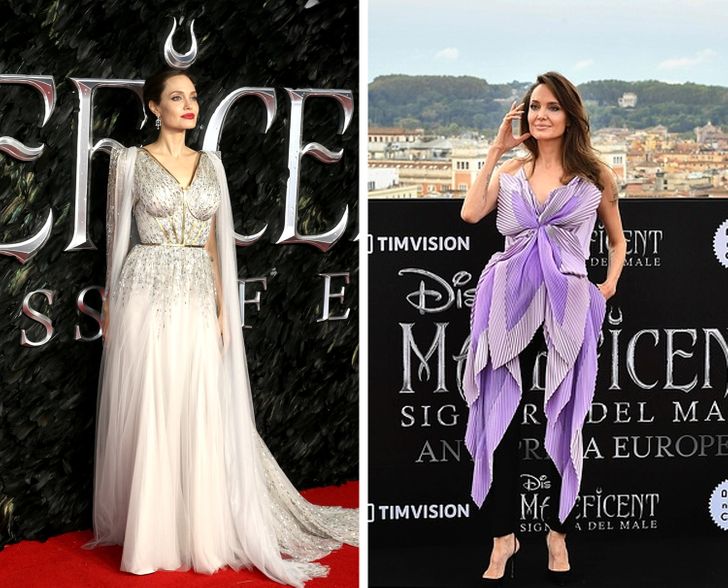 Angelina Jolie said multiple times in her interviews that her most important role in this life is the role of a mother. And she looks like a mother in her everyday life. 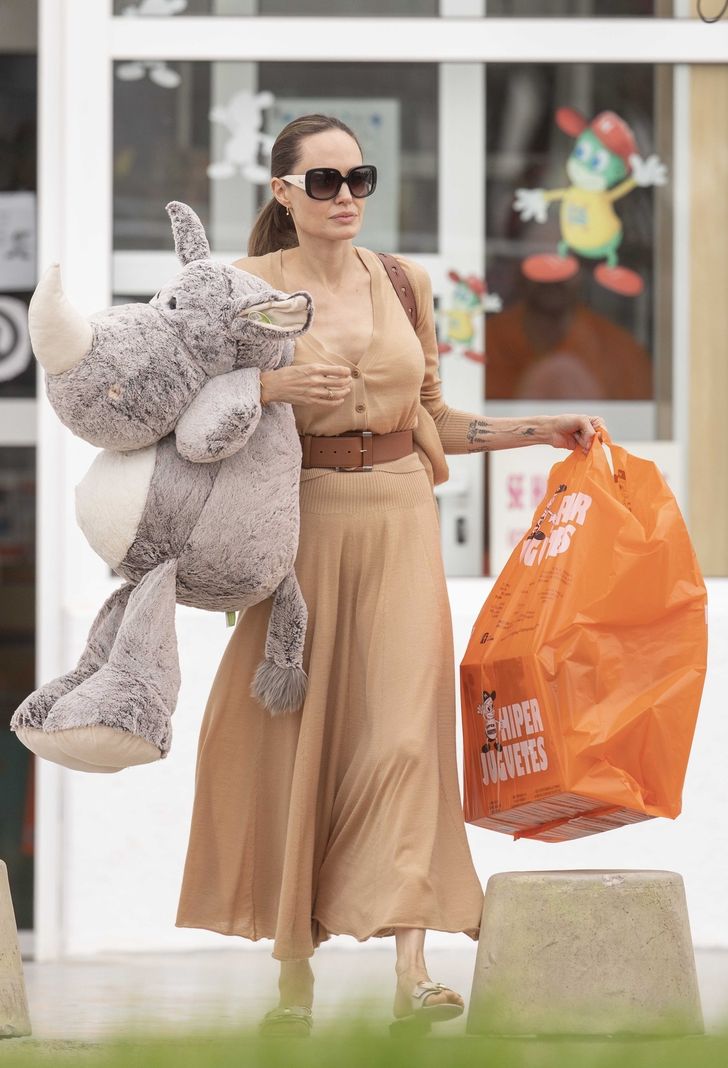 In your opinion, in what image does Jolie look the best: as a punk with short hair, a glamorous blonde, as the evil Maleficent, or as a mother of many children? Share your views in the comment section below!

12 Stars That Brought Disney Princesses to the Big Screen

19 People That Won’t Lose Their Smile, Even on Their Worst Day Ever